It's been, oh, 60 years since the surfquake and music has changed significantly. Everybody reading this website recognizes that there was something special in surf music, but it can also be crossbred to make new amazing sounds. You don't have to be trying to forge something new, sometimes you're just making the music that makes sense to you. No matter the case, here are the standouts in modernized surf music this year.

As is the case with every category, I try to choose things that I deem to be on roughly equal footing with each other. That puts a high bar up, but there are records I heard this year that I really enjoyed that are not on this list. That also means that I don't think you should think of the Honorable Mentions as losers to the winner. I think you should listen to all of these records. No exceptions!

There's a tremendous spirit to this record. The sort that not only shouts loudly and forcefully, but also the rebellious sort that demands its own methods. Their rhythm feels unexpected and strange, often not giving you enough time to catch your footing, but with enough intuition and confidence that you can trust them. And man, can they sound godzilla-sized at times, with a crashing wild energy that gives them '98 Godzilla mobility too. Ten years in and this band retains a violently youthful energy, but also the experience to know how to improve even when little improvement is necessary.

Collaboration is a wonderful thing, and much of rock & roll in general is gleefully observing the results of wild creative forces crashing against each other, and hoping that if everybody plays as loudly and directly from their heart the results will be great. But there is something to be said for the opposite. HJ & the Constellations appears to mostly be Hugo Joyal plus help on drums/percussion, and this album has the precision that suggests it's been picked apart second-by-second to see if there's something left to tweak -- something that sounds exhausting in a band format. It's lovely to hear these interesting chords, harmonies, and little touches in just the right spots, and it's laudable that they kept a minimalist approach despite this, giving it room for the melody to breathe.

Electric is right. Despite each song feeling strikingly different from the next the common thread here is an infectious, relentless enthusiasm and energy, backed up by great musicianship and outstanding creativity. A wild ride from start to finish and you're right there riding shotgun.

Troublemaker is an ambitious record full of sonic surprises, irregular instrumentation and generally more boom and rumble than you'd expect from your standard surf record. And whoever was in the studio knew what they were doing too! However, be it spaghetti western, drag racing, straight-ahead surf, there's a warmth and sense of heart that cuts through it all.

While this band has been around since 2018, I had heard zilch before this record. Not only do their guitarists play off each other well, but their keys are right there in the middle, helping them bounce and swing as much as they cruise and thrash. With seemingly no clout, no signature feature to make them stick out, it's surprising to have them in this lineup, but with each listen to to any song on this record I feel a little more impressed and certain that they belong on here. Sometimes it's just a good, fun record.

The Routes - The Twang Machine

I just did a quick glance and I counted over 10 covers of "Das Modell"/"The Model" in my surf collection. But I've always wondered why we stopped there. I mean have you heard what Señor Coconut did with Kraftwerk? Apparently The Routes thought the same thing and made a whole tribute album to the German pioneers. The credit doesn't lie entirely with Kraftwerk though. If you ask them, they are merely aiding the machines! No, what I mean is The Routes are a great band to do this, as their loud and loose style is a refreshing twist on the precise waveforms in Kraftwerk's work. "Trans Europe Express" slams, "Pocket Calculator" twists, and, most suprisingly, "Showroom Dummies" gallops! This is something I'd wanted to hear for a while, delivered right into my lap, done better than expected.

The Del-Vipers played a WTUL benefit show for me a few years ago, and since then Ross and I have remained friends, texting about surf and particularly surf-adjacent world instrumental records. When I initially reviewed this record I scrutinized it from the perspective of the records we'd talked about and through their previous material. Months later, I feel like I'm finally letting my brain relax and hear this record in a more casual way. And it's such an adventure. I loved this record then, but I feel like I experienced it inside-out, noticing the things that you notice several listens in and missing the overall feeling you get on the first listen. It's great either way. But what's almost comical is how in my initial review I almost brush off the "surf tracks" that don't show as overt world influence, while now I hear a killer surf record from start to finish, with an inspired and expanded vocabulary of influence that rounds out the experience to make it feel like a voyage, rather than just the 35 minutes of guitar that it is.

Mary Ann Hawkins is a person, but she is not in this band. Just thought I'd get that out of the way.

There isn't just one way to write surf music, nor is there a limited set of feelings that surf music should evoke, but with instrumental music I find myself attaching to it as some sort of soundtrack for imagined moments in my life. It inspires emotions, and it makes sense that I should try to imagine something to attribute those feelings to. Mary Ann Hawkins' music is so cinematic and high-key that I'm certain I would be dead if I lived the sort of life it could soundtrack. It's loud, high-stakes, savage, but also cool and capable. Even its more subdued songs are only such in a relative sense, imbued with gravitas that my life is so far away from carrying. It has moments of victory that feel like you have a cavalry behind you. And there's plain old parties more raucous than any I've attended. And that's really fun.

They make a great calamity, with a touch of brass adding an extra commanding presence, but the melodies are what matters. I found myself doing each of the following marks of a great record: thinking "oh man, I forgot about this track!", finding songs that I passed over initially grow into favorites ("Daring Trappers"), and waking up with one of these in my head. And what a way to wake up!

This category was not a runaway -- it came down to three hours of listening to this and another great honorable mention on shuffle -- but in truth this was clearly the record that got me the most hyped up this year -- including any that will be in the upcoming "rad" category, even though I decided it belongs here. 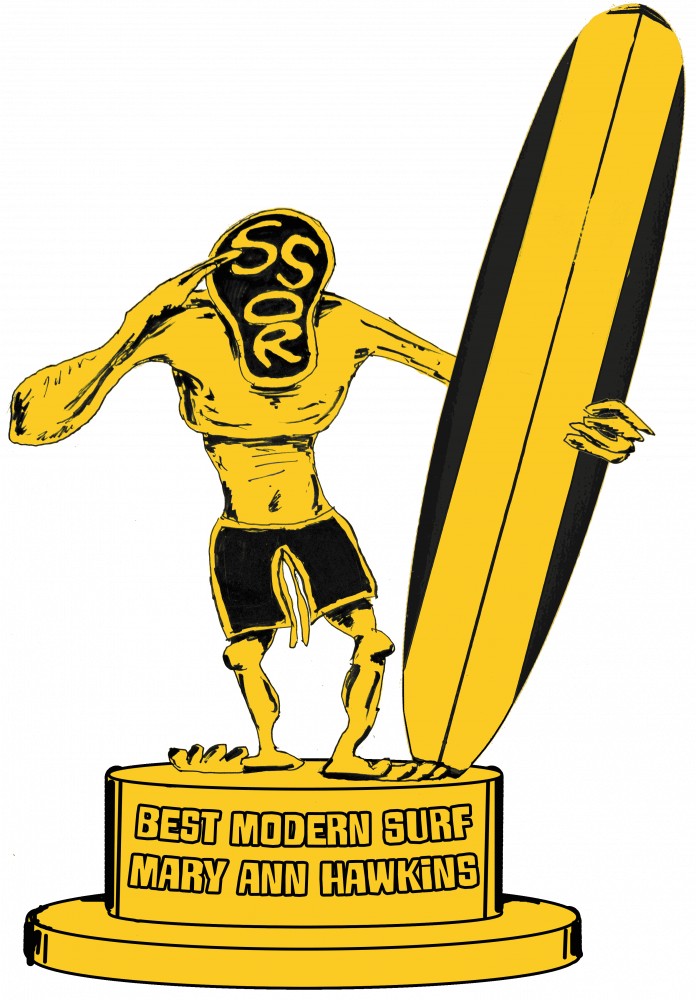