It's kind of a given when doing a review that the band is, well, a band, and the album is an album. Truthfully I don't think I understand what Chung Kings are. Their facebook description is "Chung Kings is a moveable feast of like-minded musicians expressing its love for Lo-Fi Surf, Ethio-Jazz, Latin, Rhythm & Blues and Exotica." I'm not sure that really clarifies it much. They've described this album as a compilation, which explains the names of groups in parentheses.

Here's an image that shows the members of all these groups: 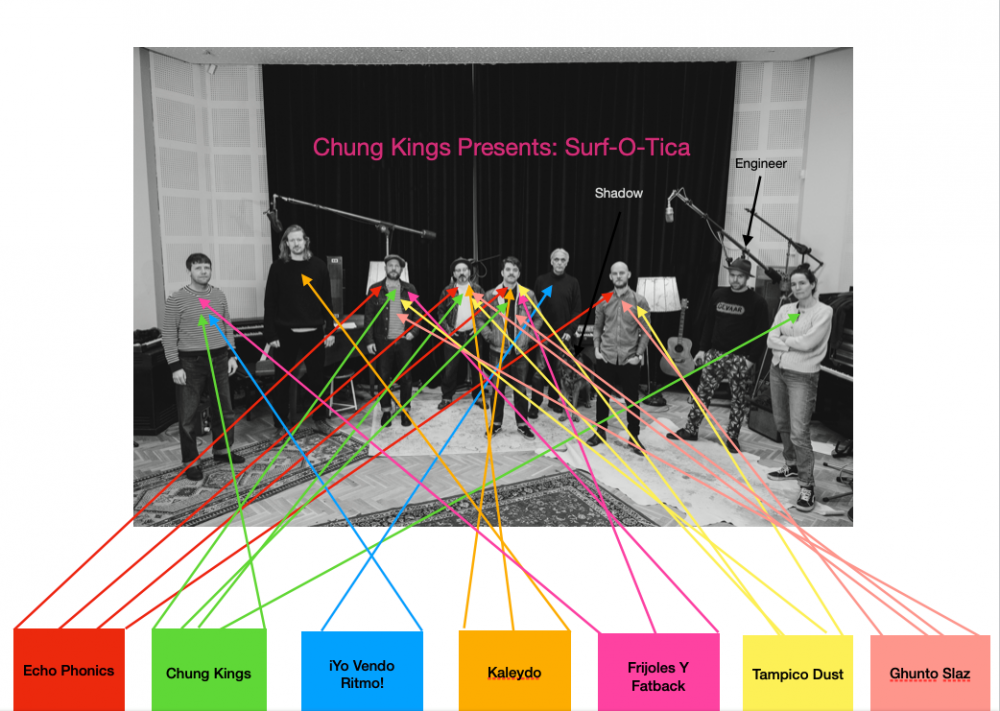 Ah, that clears it all up, right?

So several members are in several of these bands, and the only band that returns any google results is Yo Vendo Ritmo (whose LP last year was a favorite). Not to mention two songs of this are attributed to Chung Kings... so they are a band... but also not. Meanwhile, if you check the discogs page and click links to individuals, you'll find that for the most part these are members of some of several of the most high-profile soul groups in the Netherlands. I'll leave it at that in case they want to preserve the mystery, but I've actually heard of some of them! So here's my stab at what's happening: people in this musical clique would get together in a recording studio, hang out and try to make a record of "Surf-o-tica". Whatever combination of people happened to be in the studio making a song went ahead and called themselves a band. Maybe Yo Vendo Ritmo got carried away and made a whole album too.

Or maybe it is what it presents itself as: just a compilation of surf-inspired groups that don't have much web presence.

But hey, let's actually talk about the music. In keeping with the rest of this review, it could sound like a compilation if you wanted it to, or it could sound like an album by a band. There are some very common threads throughout these songs that make it feel cohesive. In the title of the album the "Surf-O-Tica" suggests an exotica influence, but they're not going full Arthur Lyman here, nor would I say this sits next to the Tikiyaki Orchestra. Guitar is absolutely king on these, though there's not a whole lot of drip or straight Dick Dale impersonation. Think the Jungle Exotica comps on Crypt though with a bit more of a straight face, or the more guitar oriented disc of the Numero Group compilation Technicolor Paradise. As much as this is purportedly a tribute to surf groups and California session musicians, I think these guys were each tapping into a slightly different feel that wasn't quite as teenage hormone fueled and is a bit more moody and expansive in influences. Think Mickey Baker's Baia (well, I guess he was a studio musician) or maybe Camel Walk.

But there's another component: the rhythm. And perhaps this is where the background of these members leaks in the most with their jazzy, r&b, and soul pedigrees. Even on the opening track "Teahupoo", that simple surfbeat shakes like you forgot it could. Maybe it's just the simple monotone bassline practically doubling as a tom, maybe it's the entire movement of the song, but it sets the tone for the album. Sometimes it can get very complex, like on the Yo Vendo Ritmo tracks, sometimes it's relatively simple but pumps hard like on "Sombra".

Whatever this record is, I love it. If all these bands are really bands, then I hope they all release an album. If this was just a fun thing a bunch of friends did, I hope they do it again.

It's streaming in lots of places including bandcamp, and it's on vinyl. It's not the cheapest thing on bandcamp for us with George Washington bucks, and there's only one track to preview, so I took a risk and went with the digital, though I wish I had spent the big bucks to ship the vinyl over here. I'll say that if that preview track is exciting to you, you'll probably like the rest.

One other thing worth throwing in there: there are members of BRUUT in this band, and they released a great surf/jazz record worth a look.