The Charades release All Around the World With... 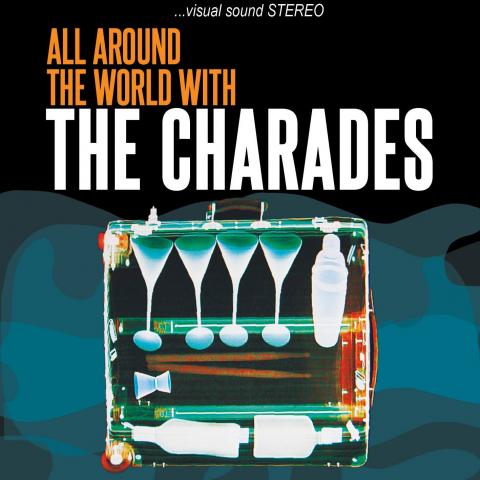 Just as the tradition of surf rock continues today, so does the very similar tradition of Rautalanka continue in Finland. What especially impresses me is that despite how thin and glassy a lot of the 60's rautalanka can be, modern groups seem to all be very slick and prettty. Based on the samples I've heard, you can say the same here. There's a few preview tracks when you hit Read More. END_OF_DOCUMENT_TOKEN_TO_BE_REPLACED 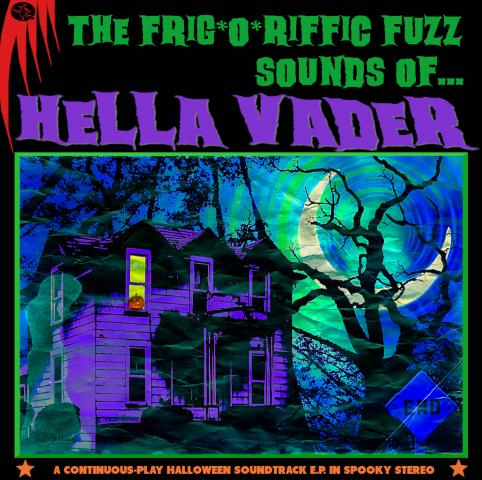 Ideally I would have discovered this before Halloween but Hella Vader likes to date all their releases to 1964 in Bandcamp so it passed me by. But if you want to turn back the clock a week, this should be pretty excellent listening. Hella Vader is never really straightforward, but this is one long cut-up of previous songs and new ones and general guitar weirdness that definitely would have weirded the kids out when they knocked on the door. END_OF_DOCUMENT_TOKEN_TO_BE_REPLACED 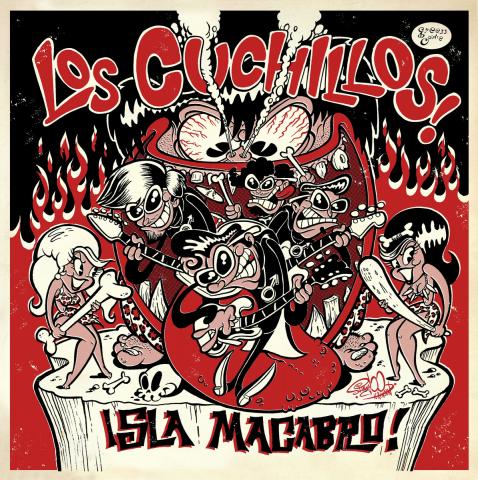 Green Cookie's had this streaming for a while, but I believe today is the official release date! I absolutely love the art on this one by Shawn DIckinson who did The Hangee V/Angry Breed 7", some Boss Fink art and an upcoming Speedball JR 7". I've only given it about one good listen but it's tough, fuzzy at times, and all around pretty fun. Another fine addition to the Green Cookie roster! END_OF_DOCUMENT_TOKEN_TO_BE_REPLACED 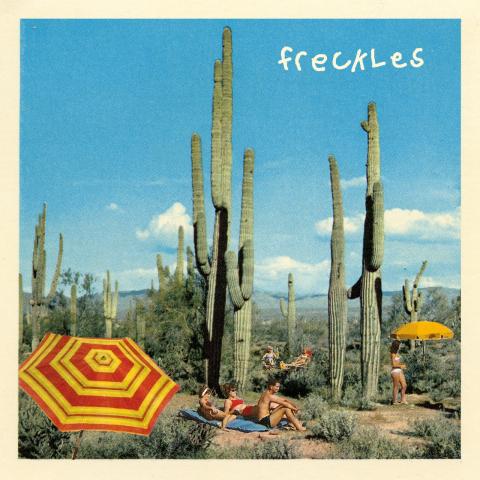 Freckles is fronted by professional skateboarder Josh Harmony, who appears to take his music just as seriously as his skateboarding. I'm witholding a joke about shredding in two ways. Anyway, a nice trad sound and it's completely free on Noisetrade, though there's an option to leave a tip. END_OF_DOCUMENT_TOKEN_TO_BE_REPLACED 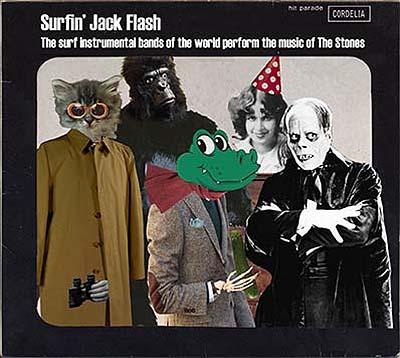 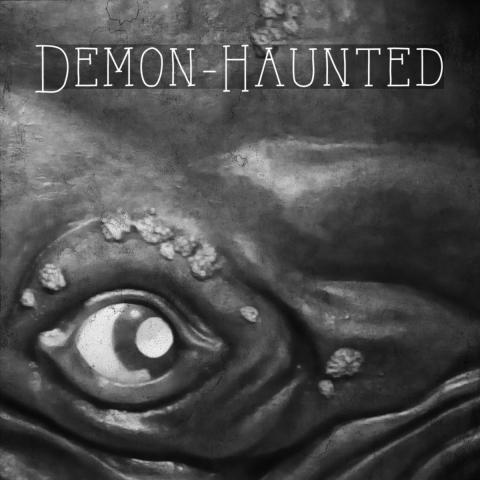 The Sloptones just snuck onto my radar recently with their EP Noir City but their 3-song EPs sound pretty promising so far. Each of the 3 songs on Demon Haunted are pretty great horror surf with all the ugly chords you want from that genre. They've upped their price on this one to a whole $1 to download.... and with free streaming on bandcamp when you click to read more. END_OF_DOCUMENT_TOKEN_TO_BE_REPLACED 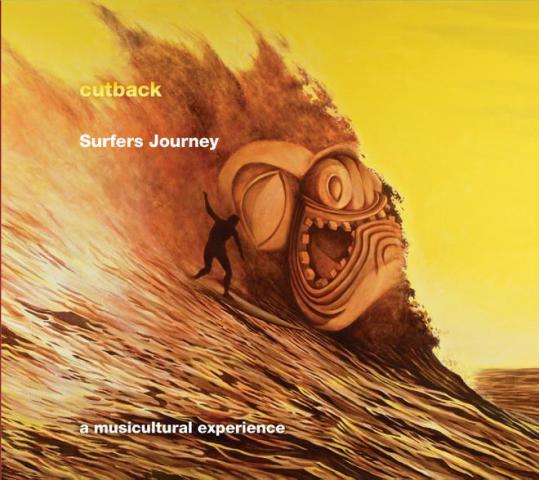 Would have posted this earlier but didn't realize it was officially out. Cutback definitely have roots in trad surf music but with a bit of a progressive edge to it. I get an Insect Surfers vibe. If I'm not mistaken, this is their first proper LP, though they've had some recorded demos.

They have samples of each track up on their website where you can order the... END_OF_DOCUMENT_TOKEN_TO_BE_REPLACED 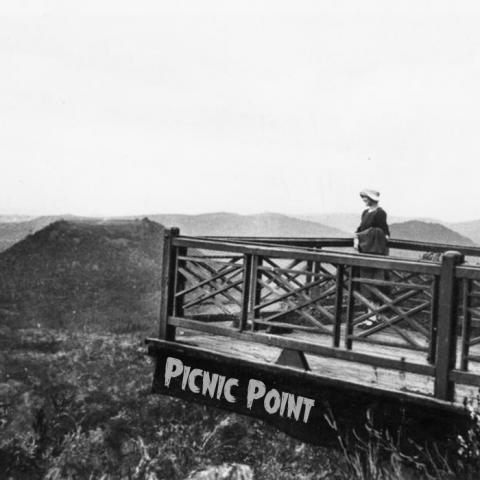 Bandcamp groups are weird. Here we have a group with a name and cover art that suggest nothing spooky, playing subdued Halloween songs with "jive" in the title, plus vintage sound clips of horror films. I know nothing about this band, but I'm digging it all the same. 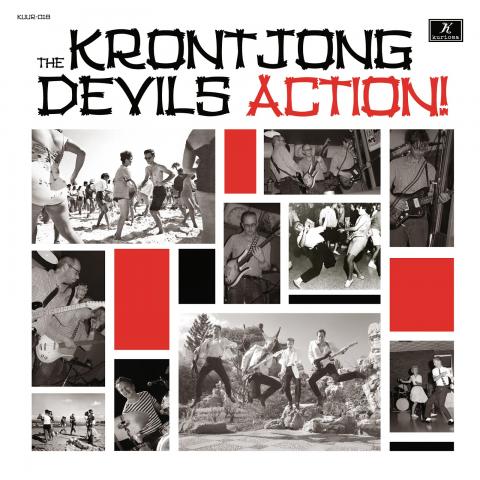 I've been bristling with excitement over getting my hands on another Krontjong Devils release. They've got a great, distinct tone, great energy and songs, great choices of covers and a few originals like "The Rafter" that are practically modern surf classics. So today is the offical release date of their Action! 10" record on Kuriosa Records.

You can order directly from Kuriosa... END_OF_DOCUMENT_TOKEN_TO_BE_REPLACED 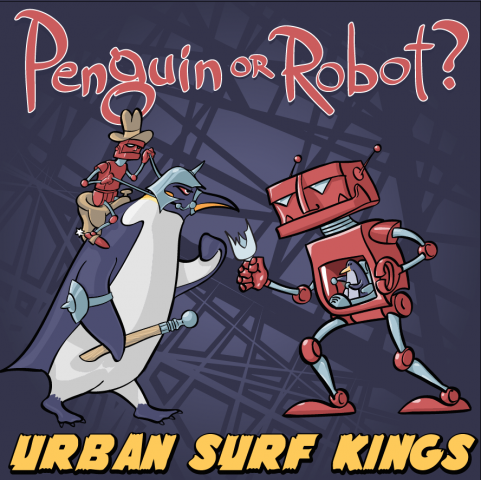 Personally, I choose robot. I love robots. Urban Surf Kings have been churning out releases like clockwork for over 15 years now, including side projects from Rev. Hank, but I believe this one has been in the works for a good while (their recording diary starts January 1st 2013). The format here is a little different: 4-song 7" vinyl that includes a download code... END_OF_DOCUMENT_TOKEN_TO_BE_REPLACED 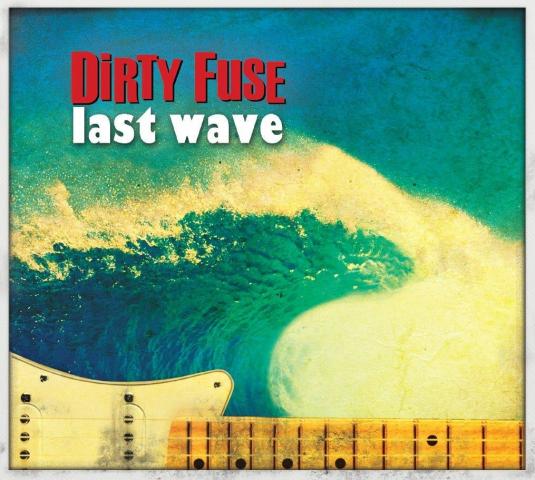 Dirty Fuse's previous album Surfbetika was definitely worth a listen: it seamlessly gave a surf twang to Greek rebetika songs. They're back to business hittin the surf with Last Wave, though they're still clearly up for a challenge. In this quick listen as I'm posting this I'm hearing LOTS of interesting saxophone, a mix of fuzz, glassy euro-styled guitar, some good... END_OF_DOCUMENT_TOKEN_TO_BE_REPLACED

The Okay-Men release Best Of 7" 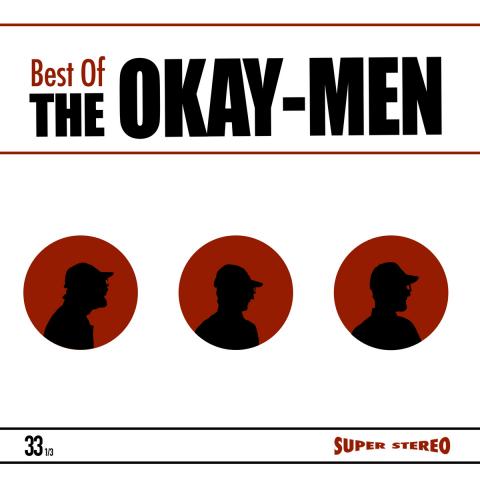 While my internet detective case didn't come up with anything confirming that, I have a bit of a hunch outside of that. You see, the Okay-Men bear a pretty strong musical resemblance to... END_OF_DOCUMENT_TOKEN_TO_BE_REPLACED 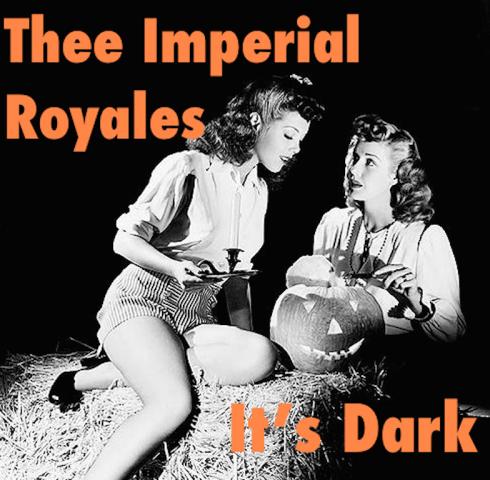 Thee Imperial Royales have only released one Halloween EP, and they're back again with two Halloween songs. I can dig it. Their bandcamp page says "This is the latest communique from those inside The Black Lodge. It will start with one song, when we say it starts. When you've forgotten, another song may be added. Then another. Soon the story emerges"" Not sure if that means they'll be tacking a few songs onto this? As far as I know this is digital-only so it's a possibility. Give it a listen... END_OF_DOCUMENT_TOKEN_TO_BE_REPLACED 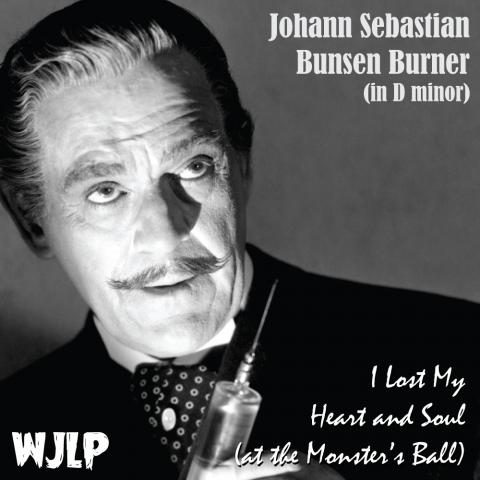 I wouldn't normally post a single song (the other song on this EP is a vocal track) but this is an excellent Halloween song that never gets covered and WJLP released a pretty excellent instro album for free a while back. Enjoy! END_OF_DOCUMENT_TOKEN_TO_BE_REPLACED 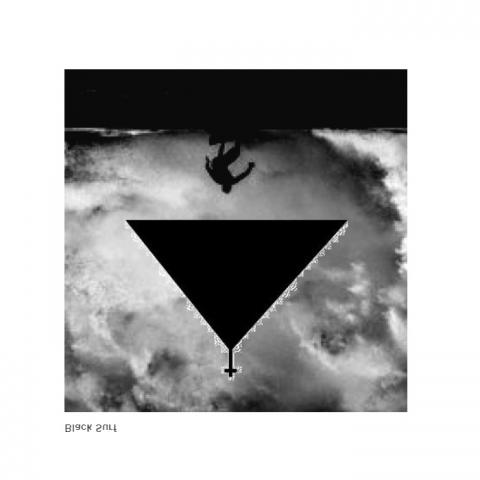 I always thought surf and noise rock should hang out more, and that's certainly the case here. ROMANTIC aren't normally a surf group, there's usually a lot more noise and a lot more goth and sometimes a few words, but underneath it all I can confirm that there are surf songs on this EP: especially Misirlou under "blacksurf ii". Check the bandcamp stream out and let me know what you think END_OF_DOCUMENT_TOKEN_TO_BE_REPLACED

The Men from... BEYOND! release Deep Tide 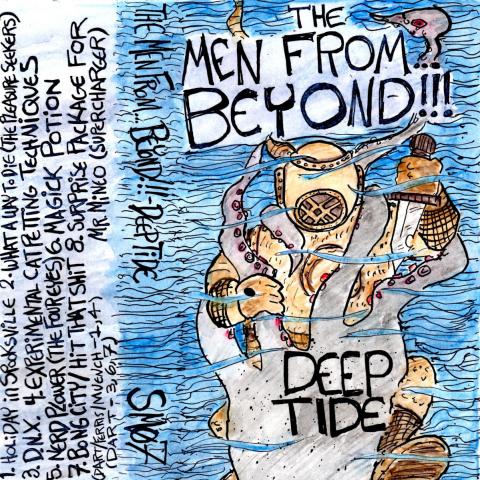 Lately I feel like I've been seeing more cassette releases than 7"s. Off the top of my head, there's these guys, Double Crown just released a comp, the Del-Vipers... OK that's all I got right now. Anyway, this one is a bit different from their last LP: I hear less MOAM? influence, and a lot of tempo changes and strange structures that make me think Shadowy Men. There's a few vocal tracks, but mostly instrumental. Also they get some props for being the only Iowa surf band I can think of. Give... END_OF_DOCUMENT_TOKEN_TO_BE_REPLACED 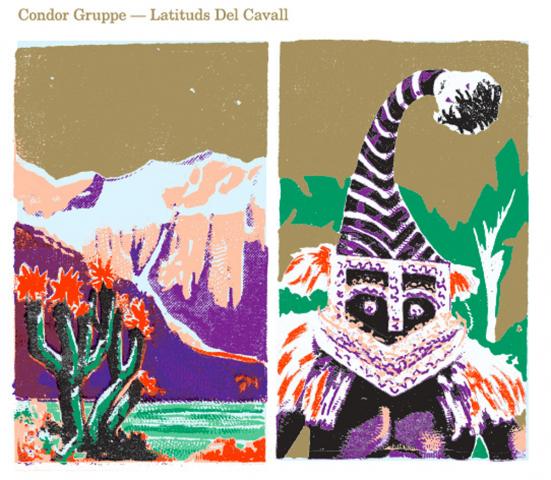 I'm a little late on this one, the album was released September 27th, but it just hit Bandcamp today which is how I found out. Condor Gruppe released an excellent EP of otherworldly-though-kinda-groovy surf-tinged instrumentals last year, and this sounds like more of the same. Definitely on the out-there side but I love instro music because it's so different, not because it's the same. Click Read More for a stream END_OF_DOCUMENT_TOKEN_TO_BE_REPLACED 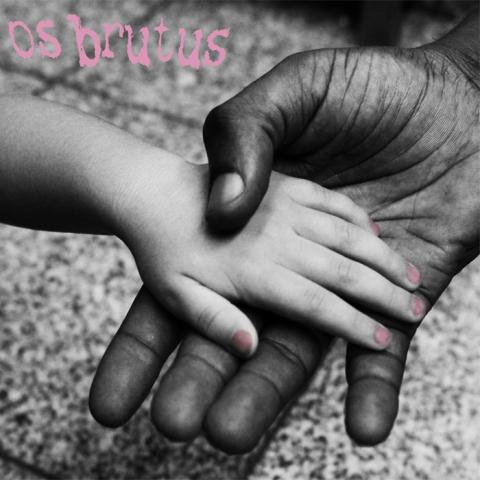 It's been a slow week for surf releases, but Sao Paolo's Os Brutus have given us a three-song EP to help us out. For those of you that don't speak Portugese (including me), Google Translate says the album title means "Dirty City Clumsy". Eh, I don't know. Love the take on the Dead Kennedy's album cover. Great heavy sound on "Nabila", looking forward to hearing more from them.

The Tiki Creeps release Invaders From Beyond The Sound Of Surf 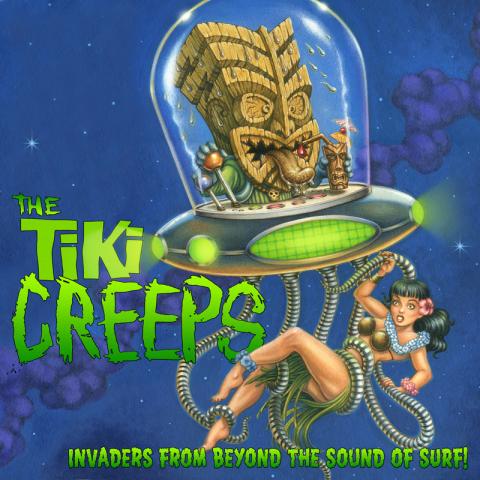 From checking out their facebook page, it looks like the Tiki Creeps tend to play with a lot of burlesque groups. Despite that, this isn't exactly a Las Vegas Grind sound, but instead reminds me more of French groups like the Irradiates, Taikonauts, and Demon Vendetta - aggressive wtih a big overdriven guitar sound, and great production. It can get a little creepy too, though I... END_OF_DOCUMENT_TOKEN_TO_BE_REPLACED 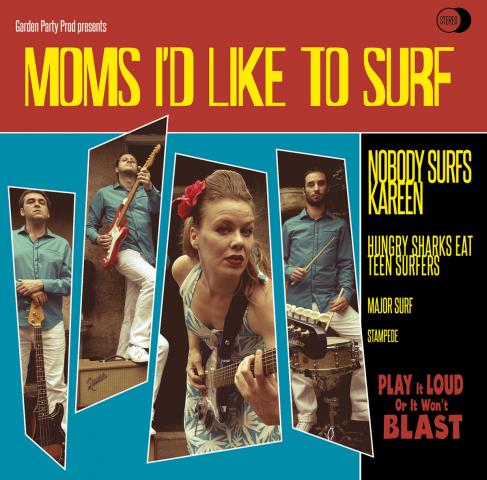 It's important for your band to have a memorable name, and I think MILS has that on lock. Another way they're a bit of an oddball: very prominent cowbell. I think it works though, and the rippin' guitars and tight playing certainly help. Definitely worth a listen and I'm looking forward to hearing an LP. END_OF_DOCUMENT_TOKEN_TO_BE_REPLACED