A few months ago the folks at surfguitar101 were celebrating 15 years since the release of The Space Cossacks' Tsar Wars. It's an excellent album, an important surf album, but to me I just can't think of The Space Cossacks without my mind drifting on to guitarist Ivan Pongracic's later work, The Madeira's first album Sandstorm. Maybe it's because it came out back when I was really trying to dig in to surf, getting ready to do this radio show all those years ago. I can't remember if I had already heard Tsar Wars, but Sandstorm had profound significance to me, and I don't know if the rest of you work this way, but when the first album I hear of a band is great it's extremely hard to ever move on from that one as your favorite.

What was it about Sandstorm? There's a lot to love, but I just want to talk about the beginning. "Sun & Sand" is a drifting, mysterious piece that while fun to listen to, is more of a tool than a song. It sets the mood, it's the establishing shot for the desert surf sound that this album introduces. It's disarming -- you were probably expecting... ya know... surf. Then as it moves into the title track "Sandstorm", a loud guitar cuts through the air. It's completely on its own, and for 15 seconds we're STILL not sure what we're expecting here. But the cymbals start to rattle, as if from the rumble of a giant's footsteps, and you're thrown tumbling into the REAL Madeira. "Sandstorm" (the song) taps into a territory that few others than Dick Dale live in: nonstop guitar pyrotechnics at a breakneck speed that somehow condense into a "pop" song that your brain can process and keep. Can I whistle most surf songs? Well, Sandstorm and most of DIck Dale's would lose most of their finest attributes in whistling form, but what I mean is that while I clearly love surf rock, a lot of my favorite bands and songs and albums fade from memory not long after I listen.

I'm feeling grandiose here: the first five minutes of Sandstorm are the greatest five minutes of surf rock released in a year with a 2 at the front. Taken as a whole, this was the album that told me, back in 2005 trying to bone up on my surf rock with this stupid idea of a weekly surf radio show, that surf rock isn't just a bunch of dudes stuck in an era. That the stuff coming out wasn't just the long drawn-out end of a 90's revival after Pulp Fiction (Man or Astro-man? should have made that abundantly clear, really). Surf rock just IS, and will continue to just BE, and will continue to do what it will.

The thing is, even in the 60's, instro music was about taking you somewhere. We think about the beach - it's probably where we end up going the most, but it's taken us to drag strips, caves, crypts, the straosphere, outer space, the future, the dinosaurs, EVERYWHERE. When you're not explicitly telling your audience to think, they'll end up going anywhere, and that's what makes this music great. I'm pretty sure The Madeira have observed this. Sandstorm took us the desert for the first time I can think of in surf rock, Carpe Noctem took us elsewhere in the desert, then Tribal Fires took us to the jungle, then Ancient Winds took us to the sea.

Here's the thing: in case I haven't made it clear, I loved that first desert. And even with their excellent Ruins EP (essentially more Sandstorm), I honestly didn't really have enough of it. Moving on and challenging themselves is what makes The Madeira who they are, what makes them a worthy ambassador of today's forward-pushing breed of surf, and they've gone to new exciting places because of it. "The Ritual" off Tribal Fires is a Madeira favorite that has no place on on Sandstorm. It's slow, monstrous, and strangely sincere. Like a lullaby for the Kraken. It's a sound that Sandstorm never touched. But I remember when I asked a record store employee about which Mekons album I should buy and he said "I haven't listened to them much, but they're a punk band so you should buy the oldest album we have". That was ages ago, but I know what he means: that first album is often the quickest route to the core of the band. Incidentally, Curse of the Mekons isn't really representative of early Mekons or that record store clerk's maxim, but is representative of my inability to let subsequent releases knock my first exposure to a band from its place as my favorite album. Also incidentally, I found out nearly 10 years later that that clerk also has a huge penchant for surf rock. Waddaya know.

This is where The Monterreys fit in. What? 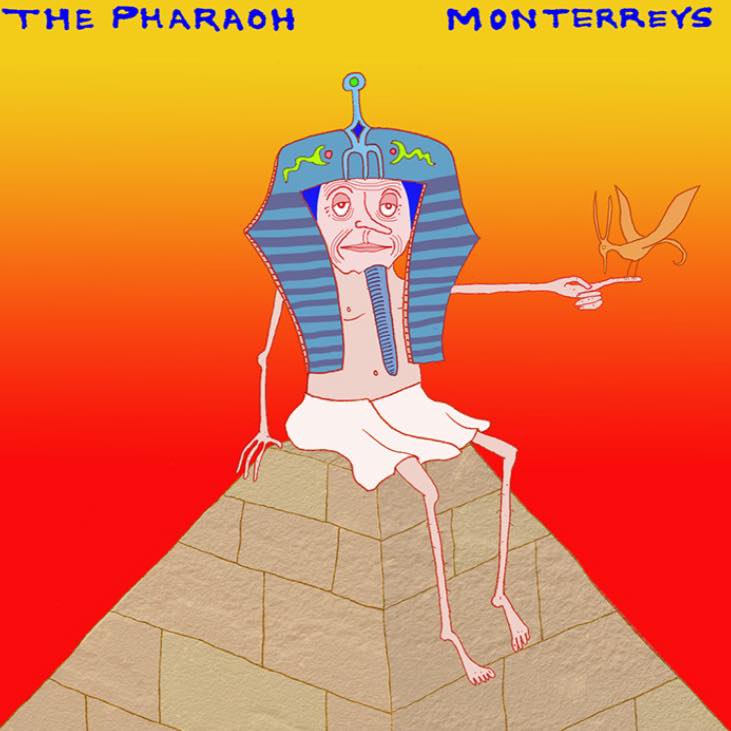 Let's forget everything I've said so far for a sec. I just love that skinny lil' dude chillin on the pyramid. It's so modest considering the noise inside the album.

OK Let's forget that too. I hadn't heard any Monterreys before I got this one, but I'd heard a few samples online. They bill themselves as "Heavy Loud Surf!!!" on their facebook page, but they also said that they mix in some flamenco. I've heard a lot of bands claim that, and I rarely actually hear it. Closest I can think of is The Good The Bad's album 034-050, and that was after two other albums of the flamenco sound being inaudible. On The Pharoah the Monterreys see-saw back and forth between flamenco and full-tilt surf: one song surf, one song flamenco, one song surf, one flamenco, etc. While I don't think I like flamenco enough that I would listen to an entire album of it, these are only about a minute long and serve as nice mood pieces, setting an atmosphere before these surf monsters come in and tear it all to hell. Do you see what I'm saying here? It's an ENTIRE ALBUM of the first 5 minutes of Sandstorm!

That's a bit of an unfair and simplistic comparison. First of all, I shouldn't dismiss these flamenco tracks as a gimmick as they're very well played and clearly had a lot of effort put into them. Second, The Monterreys don't deserve to be called a simple Madeira clone. These songs are absolutely huge, but a lot of people have figured out how to make surf sound loud and heavy (and I hope many more bands do!). The Monterreys' guitar sings desperately and deftly over the tracks with clever middle-eastern influenced licks. You might be thinking "uh, still sounds like The Madeira from your description". Well first of all, The Madeira is pretty damn good and you have to be a pretty damn good band to invite that comparison, and let's face it: reviewing surf is about drawing out the subtleties between bands that are all after nearly the same sound. And that's very hard to do!

The whole reason I bring this up is that The Monterreys delivered on something I had been looking for, whether they intended to or not. Although I should note, it was a smaller helping than I'd hoped. The album is over way too quickly with essentially 5 surf songs and the flamenco tracks only lasting one minute. And while I'm complaining, they have a secret track buried after like 50 tracks of 4 second silence. This is pretty much the worst thing to do, it makes me listen to that secret track with resentment, and at some point during this lame duck period Obama should make secret tracks on the whole illegal. They're just inconvenient. 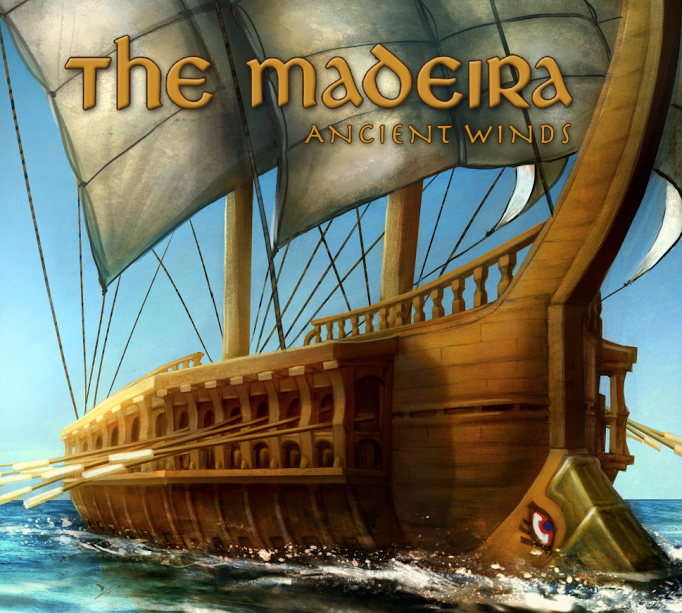 And so the Madeira now have another album out! Seemingly with a nautical theme. Right in the first track they make it extremely clear that this is not an easy cruise with IMMEDIATE loud and fast guitars. I mean, I thought my CD player just missed the intro at first. I opened it in an audio editing program and the music hits at full speed in 0.3 seconds. Now since I had planned on writing this article before I got this album, I couldn't help but listen through a lens of "how Sandstorm is this?". While every album they've released can get extremely ferocious, there's also different shades of how moody, pretty, and/or Atlantics-ey they can get. I'd say that Ancient Winds spends less time immersed in its setting than Carpe Noctem or Tribal Fires, though where it does come through is this constant feeling of motion and momentum and going somewhere, maybe even chasing something, even on its calmer songs. And really, not that that was something I really thought in Sandstorm, but it does kind of feel like this is a bit of a throwback. But then I hear tracks like "Ancient Winds" with its high-pitched twinkles that make me think Carpe Noctem. Well yeah, even when they go somewhere new, The Madeira are made up from where they've been. What it really comes down to is this: it's damn good. The heaviest track "Caravela" will lay you flat on your back on first listen, and there are plenty more great, loud forceful moments on here, but everything on it has you riding the flicks and twists and whips that the guitar lines take you through. I don't think it has anything like those first 5 minutes of Sandstorm, but if I haven't made it clear, they have to somehow jump over my stubborn personal mental barrier for me to EVER move past that. It's pure Madeira, and if you've liked that so far then you're almost certain to like this too.

Total votes: 37
What do you think of this? Voting is anonymous.
Tweet