This category is for surf groups that don't feel like they need to closely imitate the sounds of yesteryear, who carve out their own sound and identity. I don't know if I've ever crammed this category with so many records as this year -- and this is after several difficult cuts. Maybe I need to be more ruthless, or maybe there was just so much to love. I like to think it's the latter. Here are what I consider to be the cream of the crop for 2020. 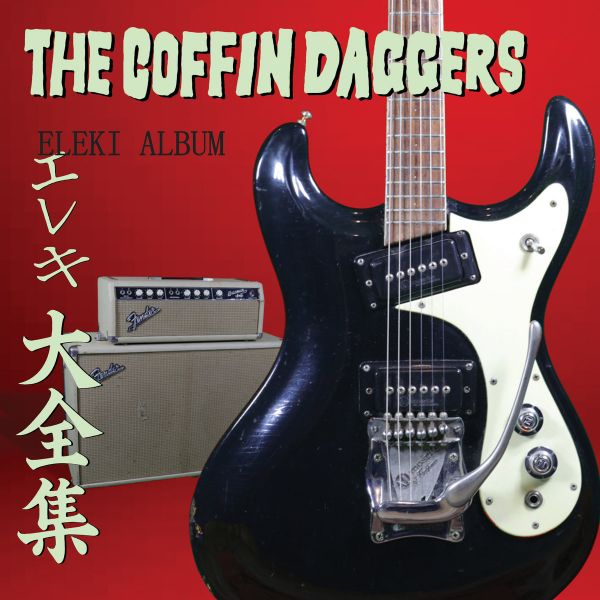 Officially released in January but shipping in late December of 2019, The Coffin Daggers started off the year on a high note with this slammin' cover album of some eleki hits. Their take is surprisingly traditional, even kind of meeting halfway, adapting their sound to that sharp twang. But the important thing is that that Coffin Daggers bite is all over this. This record sounds so alive and vibrant, and I think that stuck with a lot of people as it stayed in their listening rotation throughout the year. 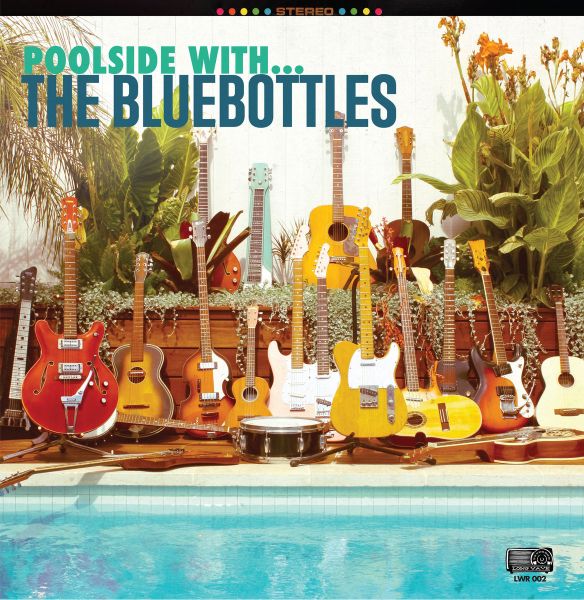 While its intimate party feel had me considering this for the trad category, I don't think they were specifically trying to recreate any retro sound here. And despite that party feel, there's a lot more complexity to this record than you might immediately notice. Do yourself a favor and listen at an "active" volume, because the catchy guitar melodies are up-front, but there's a lot of subtle instrumentation lifting it up from underneath, and that really gives this record a push. This is simply an expert record in both composition and execution, with the balance of rock&roll horse sense and playful tweaks that bring Los Straitjackets to mind. 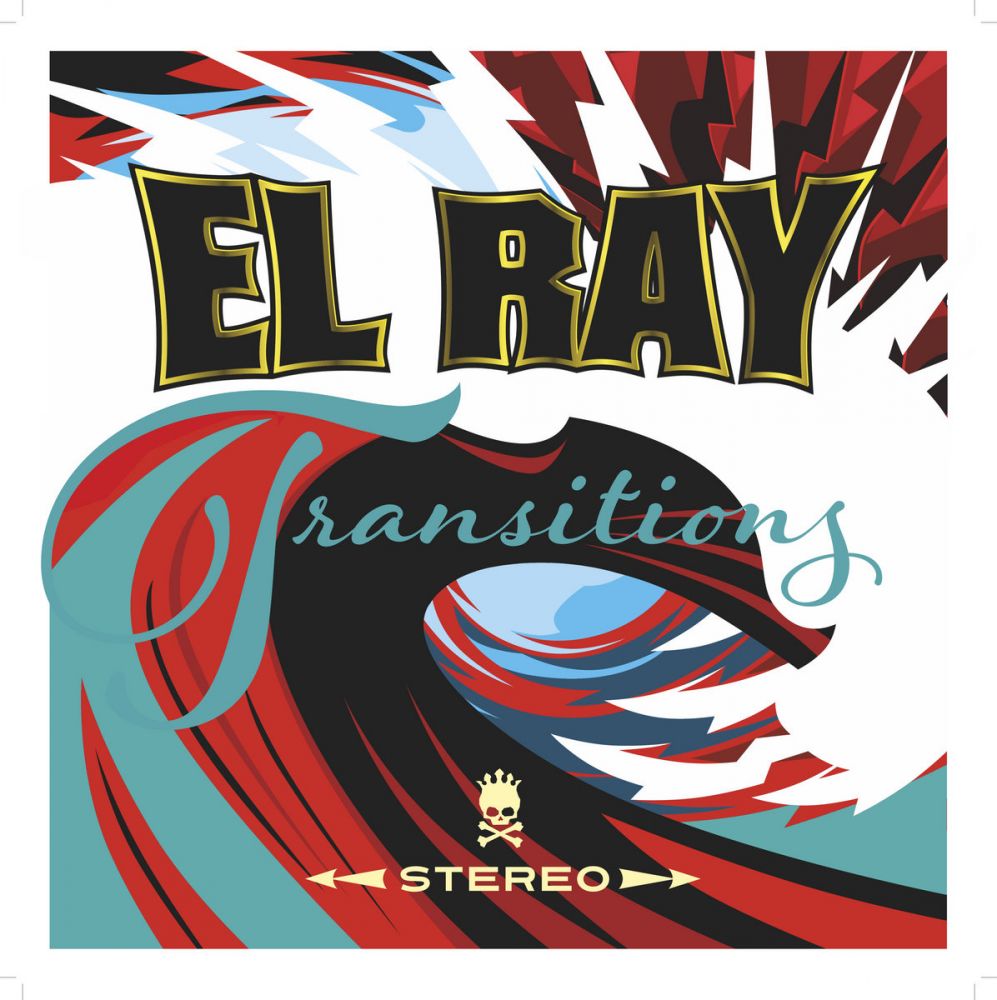 It's hard not to compare Transitions to previous El Ray records. This is not an overwhelming show of force. However, this is not a quaint dadsurf band by any stretch. A prowling tiger looks just as scary as an attacking one, and this is very much the same tiger, frequently flashing its claws and menacing growl but also showing its grace. There are some devilishly effective tricks on this record that are both surprising and effective. While I hope this isn't the last we'll see of loud El Ray, they've proven that their skillset is in this realm is wide, and mostly I want them to make records that show off everything they can do. 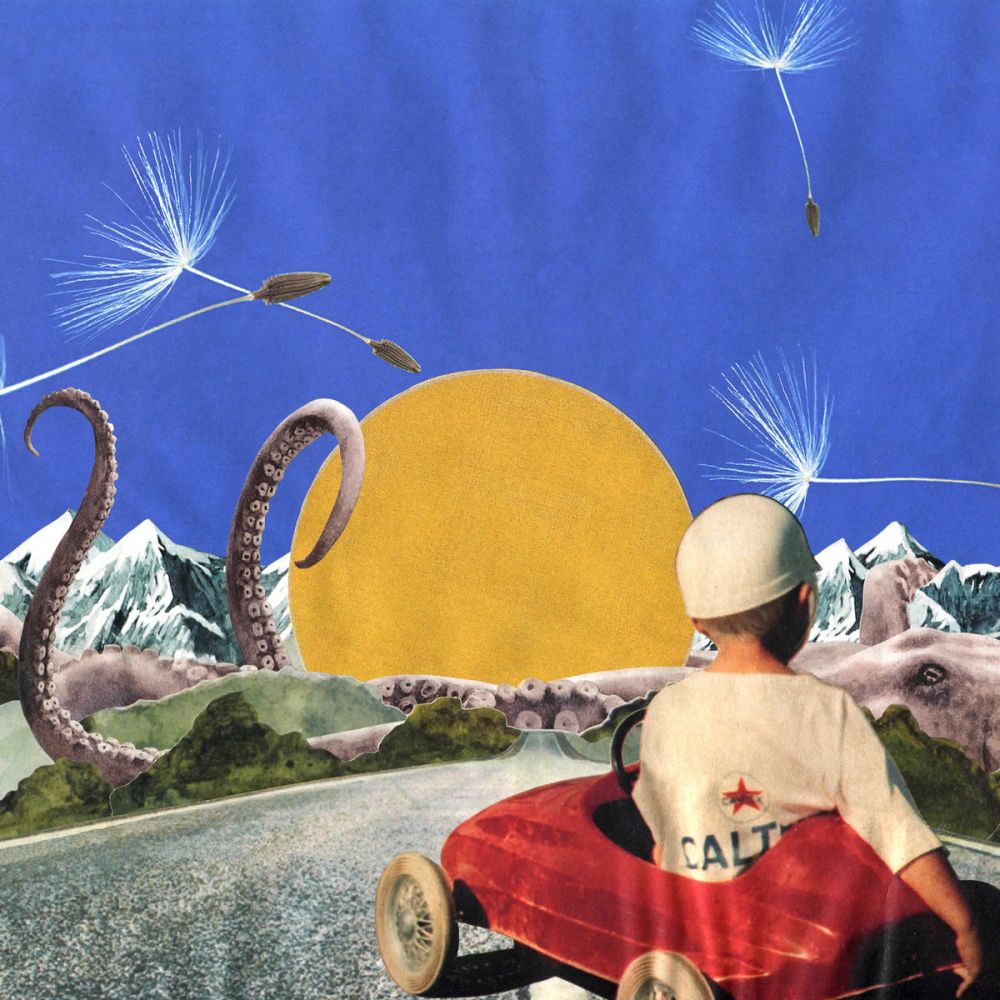 Stripped down with not much in the way of discernible effects, this trio doesn't need to make themselves sound bigger, they're charged up with all the energy they need. Though they stand right in the middle between surfy twang and post-punk dischord, it's a joyful, pure sensation, an exciting frenzy that feels welcoming and brings you into their madness rather than wielding it at you. 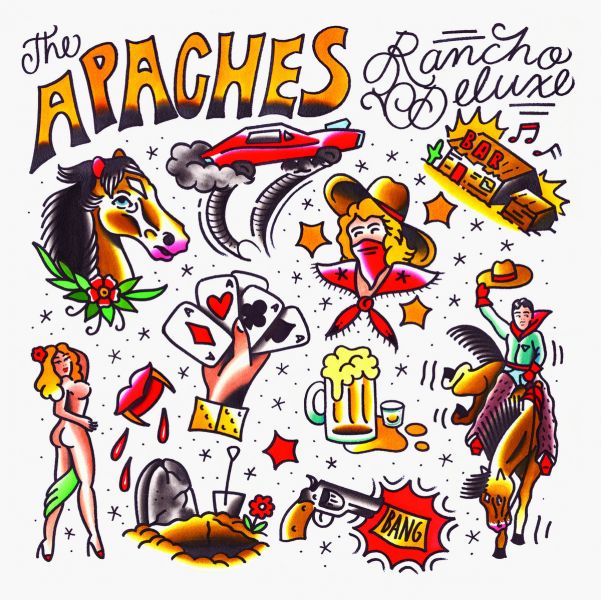 Rancho Deluxe feels like the record this band has been trying to make from the get-go. It nails that sparse, desolate feeling while still managing to feel substantial and big, and that sound makes these songs really come alive (especially with the help of some great steel guitar). This is a top-notch Western surf record, more in the vein of Rawhide than Morricone, and it's just as fun when it gallops as when it dances, shoots bullets, or sits by the campfire. 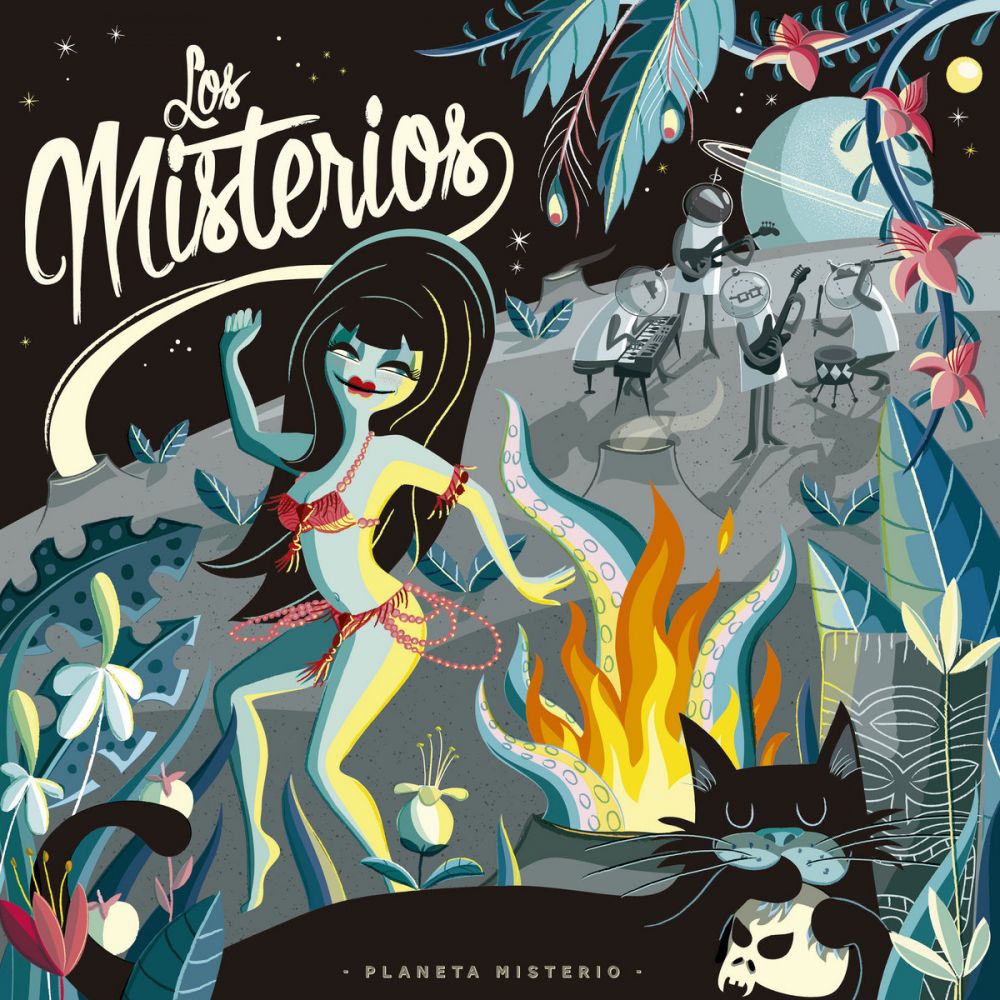 The first track sounds barely removed from the Batman theme, and the prominent organ and popping beats initially give it a mod/lounge feel, but that melts away into something deeper. There are stronger moods, more deliberate and interesting guitar lines. The rhythms are of course fun to move to, but they serve more purpose than that, creating a different landscape for more familiar surf sounds to inhabit, and ultimately giving this group something interesting to say. They remind me of Fifty Foot Combo, and I hope they continue to evolve and expand much as that group did. 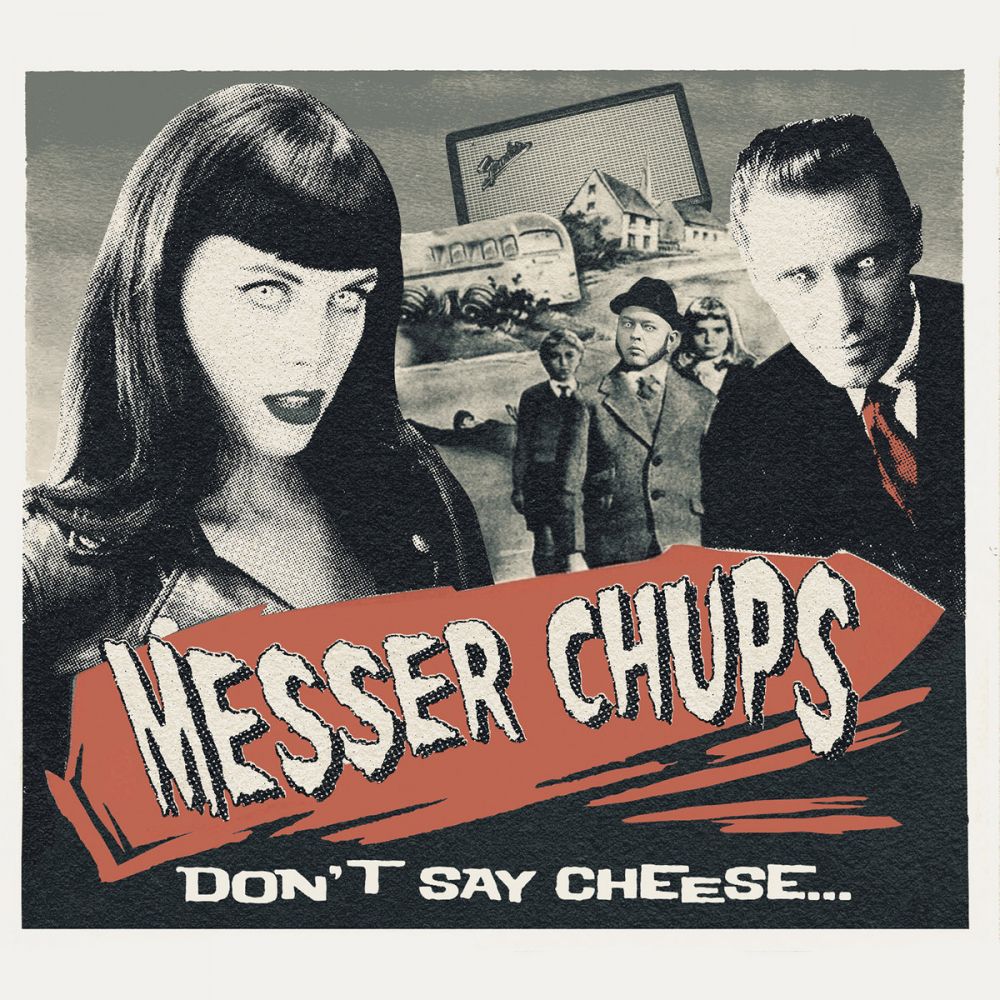 I have a hunch that what you were asking for in a new Messer Chups album was not 4 tracks with a vocalist and 4 tracks they've already recorded. Yeah. It's probably the goofiest album title they've had too. But they sound great here. The recordings so far have never left me feeling disappointed sound quality-wise, but I think this brings out a muscle to their music that I had only really heard seeing them live. And for that, I don't mind the "2020 version" tracks. Meanwhile the new tracks are fantastic -- pretty, haunting, but also a little campy -- pure Messer Chups. And at 18 tracks there's plenty of enough instrumentals to live comfortably with the vocals. 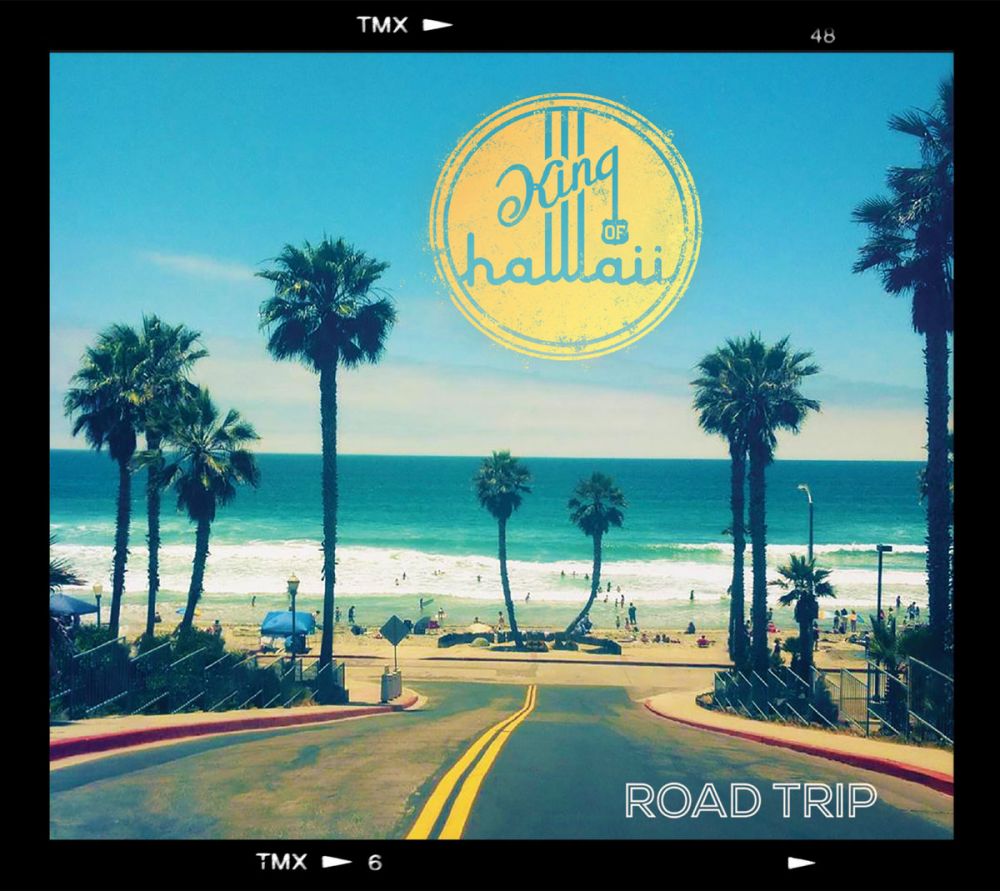 It's hard to sum this record up into a quick blurb. From the opening track you've got a decidedly un-surf tone giving way to an ethereal synth passage. And then on "Big Sky" you're more in the country realm, with steel, strings, acoustic guitar and some Leslie-ish organ. This is an album about discovery. The spirit of a road trip is there, full of fresh new sights and sounds, and with bright eyes and anticipation for the next surprise. 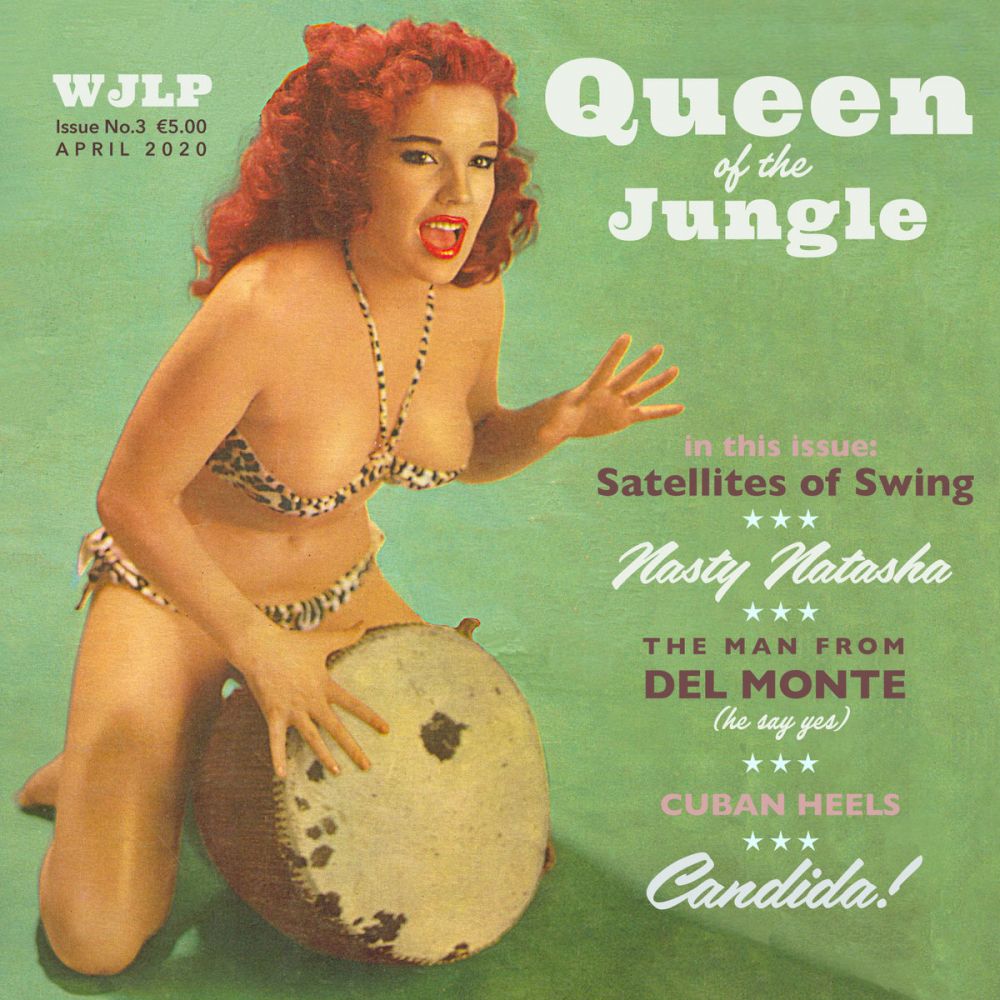 WJLP - Queen of the Jungle

In 2017 WJLP won the Modern Surf category with Out of This World. This record is a little more earthy, though not completely gone away from whooshy space effects. Songwriting is why that record won, and it's why this is a fantastic album as well. These are loud and action-packed tracks that cover a wide range of sounds, each played with gusto. Take "The Man from Del Monte" bopping at a rousing pace, snapping you to attention with sitar-plucks that take it into theme song territory. "Queen of the Jungle" is a great, lush, exotica track, and "Cuban Heels" has a wild swagger in its walk. At this point you can just assume a quality release from this artist, we haven't been let down yet. 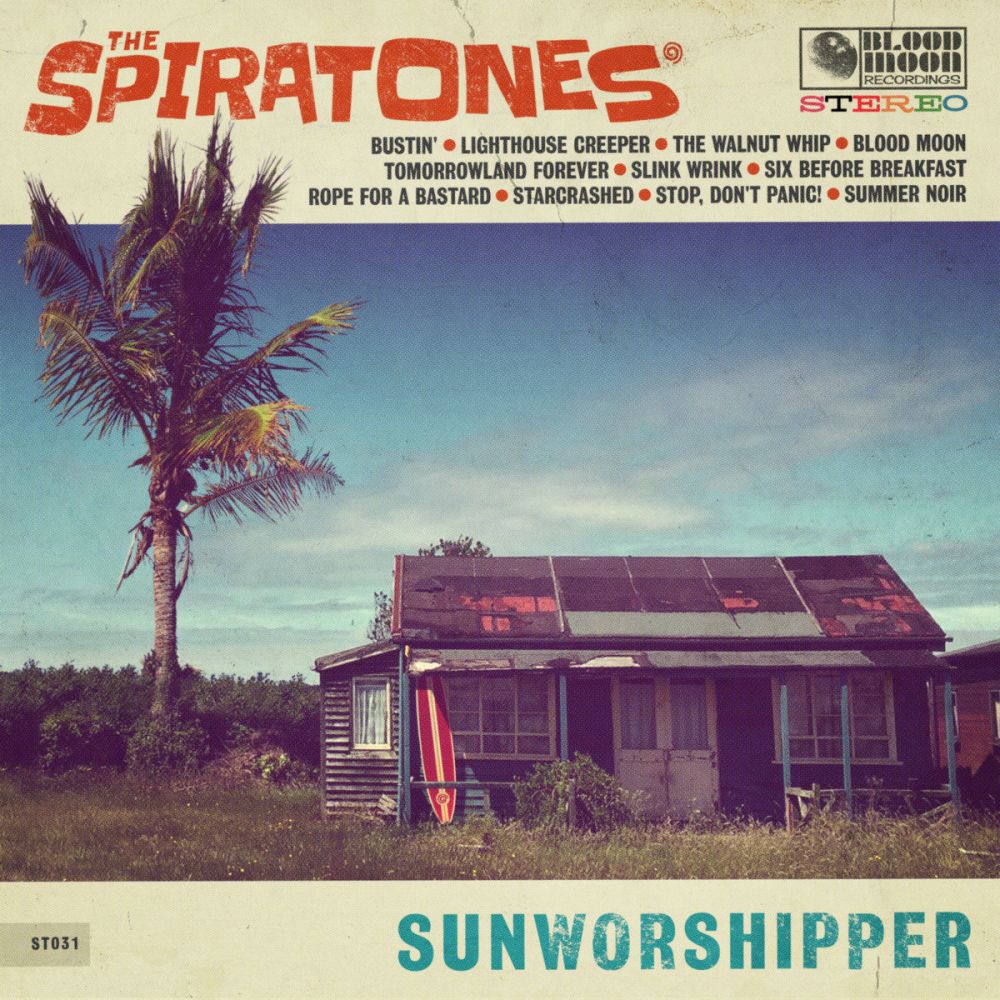 After a few EPs and singles, we have our first LP from the Spiratones, really showing the full range of what they're about. While not a traditional surf band, this is a traditionally-minded record, with plenty of songs like "Walnut Whip", crafted for little meaning than a good time. But there's some serious guitar that occasionally have to have their moment, like on the particularly noodly "Six Before Breakfast" and the impressive speed of "Stop, Don't Panic". That flashiness never goes out-of-bounds though, and the songs stay strapped to a fun rock&roll beat. But their range is great too: "Rope for a Bastard" is far more genuine Morricone than most token Western tracks, and Summer Noir is a great Aqua Velvets-ish slinker. It's a shame that this is the near of no stages, because I bet this band would turn some heads at a festival. 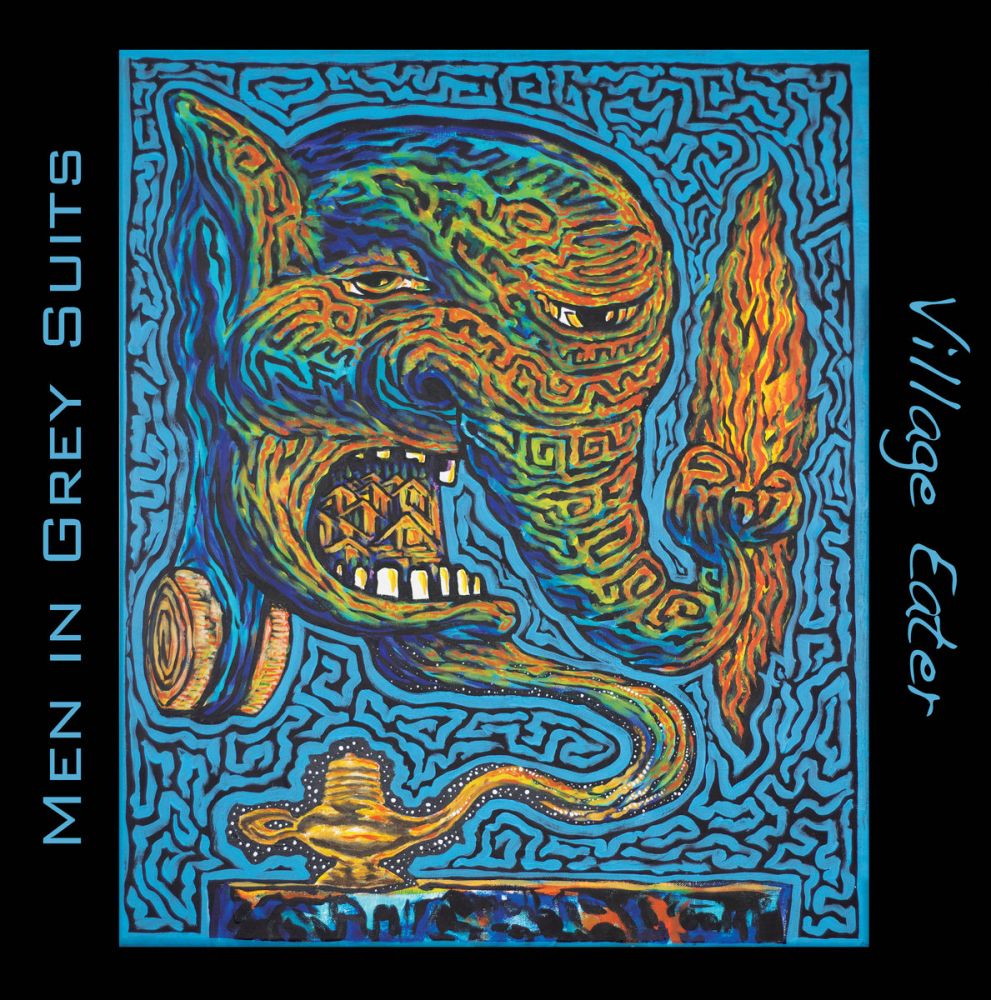 If Men in Grey Suits wanted to be a normal surf band, they'd do great. The guitarwork here is noticeably skilled, they have a great tone, and a lively, propulsive beat charging through. But if you're weird, ya gotta be weird. Take "Fish Cuts Water" with its foreboding sound right at the beginning, shaping up into a strong surf song, then punctuating with these alien moans cutting through. Or take the anti-gravity float of "Valentines Eve/The Slow Horde", slowly roasting in the decaying organ sustains while the guitars give an occasional rousing push. It's a strange beast with a dark heart, but it's beautiful.

And the Gremmy goes to 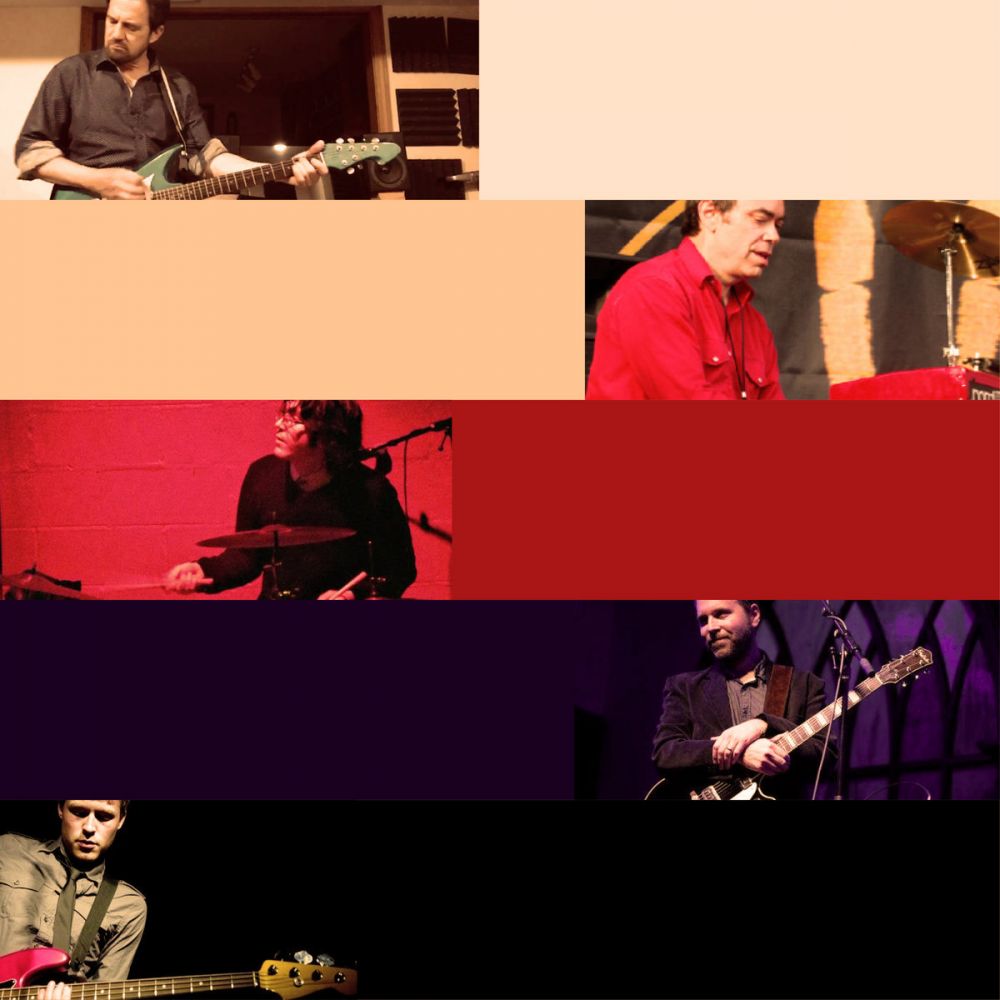 When this first popped up on bandcamp it was just two singles, and I thought that was it. They were very good singles, I certainly took note, but it wasn't until I was compiling releases for the list that I noticed there was a full LP. And wow.

This is a high-flying wide-open surf showcase record, with that same sort of "let's do it big" approach that we've started to see more of since The Barbwires' Searider (modern recording has of course made that sort of thing much more doable). So that means a wide array of instruments and sounds bursting and flashing, and boosting the melodies subtly with fun flourishes. Surf music fit for space perhaps moreso than the beach, and it's a band you'd imagine on a big stage with curtains that don't smell like cigarettes.

I don't think Mr. Galaxy approached this with an attitude of superlatives, like The Barbwires tried to make the Pet Sounds of surf music, and I would say that the raw teenage spirit of surf gives way to this cosmic journey told through surf music. There are moments of noodling, jazzy grooving, and even 60's soundtracky beat-psychedelia. Rather than a collection of songs, this record is a performance, and it's a lively, imaginitive, wonderful one. 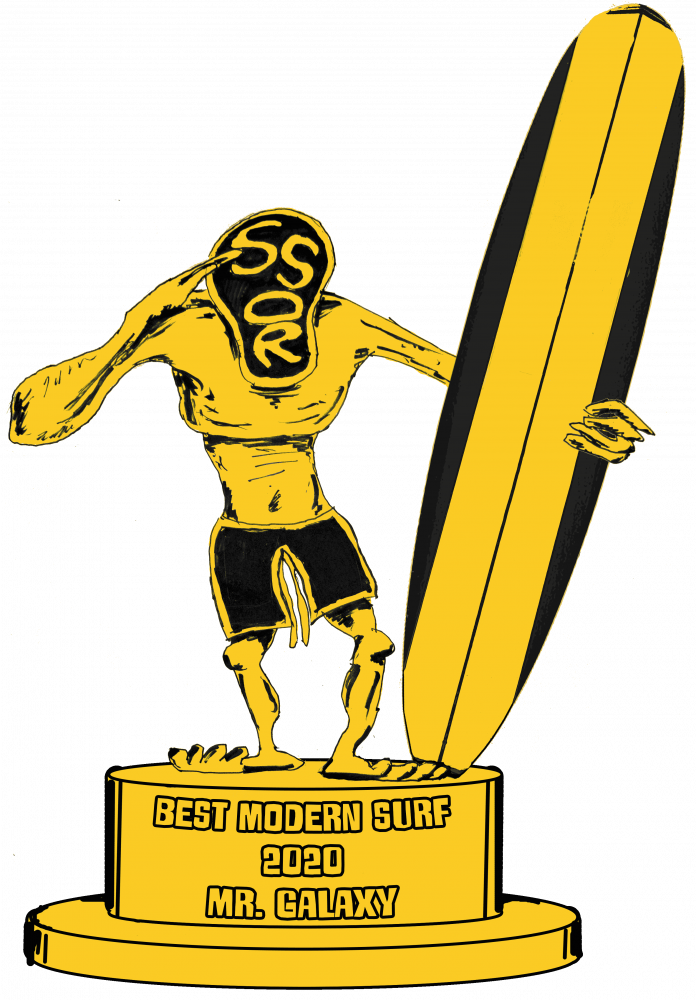